Hello everyone,
Thank you for stopping by on my page,I am writing this after ages.

Here is a small piece that I wrote for my office that I am pasting here.

Hello Everyone, I am Manasi Joshi, an Indian para-athlete working in Atos India from Dec 2010. I have recently got selected for Para-Badminton World Championship 2015 to be held at Stoke Mandeville, UK and I am sharing my journey about how I became an International player with you all. 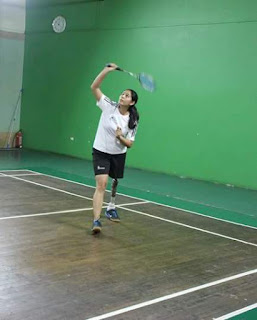 I started playing Badminton when I was 10 and got trained under coaches from Department of Atomic Energy Sports council. Over the years I had the opportunity to represent my school, college, and corporate at various tournaments.
On 2nd Dec 2011, on my way to work, I met with a road accident and lost my leg and mobility to it. After 45 days of hospitalization and 3 more months of recovery,  numerous hospital visits, rehabilitation and prosthetic fitment, I was back on my new leg. It was extremely overwhelming to be standing on both my legs again and I can never forget the look on my parent's face when they saw me relearn to walk.
After the accident, I played my 1st tournament in August 2012 at Atos Mumbai Badminton championship and won 1st position in women’s singles.  It boosted my confidence to such an extent that I started having faith in myself playing Badminton again. That was the time when I was learning to walk and was trying to adapt to my disability. Soon I started working on my skills and walking, so I could get rid of the crutches that had become a part of my identity.  It took me months of hard-work, perseverance and patience to walk properly without support. I still remember when I first time I went to office without an extra crutch, I was greeted with lots of appreciation and applause from my friends and team mates.
Later I started moving on with my life and Badminton took a back seat. I practiced occasionally because of issues related to my prosthetic fitting and there were times where for months I never practiced. In June 2014, I gave myself a new goal, to lose the accumulated kilos and gain my lost muscle strength. Those daily targets and weight training in gym, walking, etc., made me realize the importance of human body and its wonder. That time I played again in Atos Badminton tournament and again won 1st position in Women’s singles.  I realized that I can play whatever I want and I must pursue and push myself further. In August 2014, I represented Maharashtra and showed my skills at National level to selectors of Sports Authority of India at Selection trials for Asian Games 2014, Incheon, Korea. I didn’t get selected for Asian Games but realized how people with disabilities play and perform at National level. I was overwhelmed with the memories that I collected there. Then in December 2014, I played my 1st National level tournament at Mumbai and won a silver medal. I had played against the world no. 1 and Arjuna awardee, and Rashtrapati padak winner, Parul Parmar which was my biggest honor. That tournament was my selection for Spanish International. 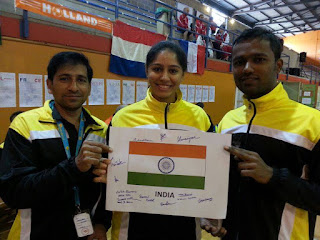 For Spanish International tournament, I practiced for two hours a day during weekdays and 4 hours a day during weekends. I did shadow practice in whatever free time I could get in between work. The 5th Spanish Para-badminton International Championship was held in a beautiful city of Alcudia in Mallorca, Balearic Islands, Spain. Tournament was organized by Badminton World Federation and Spanish Para-badminton Association.  We stayed in the most beautiful part of Spain and took out one day from our schedule to roam around the Island on the last day after the tournament. 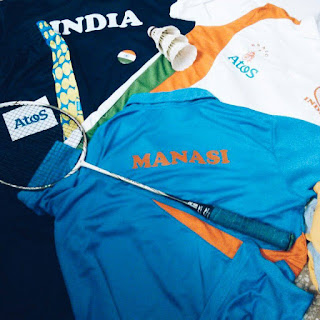 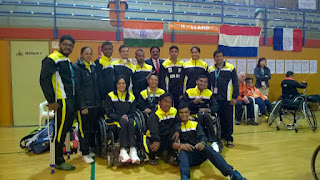 BWF classifies athletes on the basis of their disability to different categories. I was classified as SL3 i.e. Standing with Lower extremity affected class 3 and SL3 play on a half-court. All people having issues in the femur region are classified to this category. There are other categories like SL4 (Standing Lower Extremity with issues with Tibia and fibula), SU5 (Standing with disability in Upper Extremity), SS6 (Short Stature or dwarf), WH1 (Wheelchair 1), WH2 (Wheelchair 2). I could have been classified either as WH2 or SL3 but I preferred playing standing as I had never used a wheelchair to play badminton. After classification, we had our practice time allotted to Team India. I met my mixed doubles partner, Vikram Kumar, SL3 from Chhattisgarh. In whatever time that was given to us, we coordinated and learnt about each other’s weaknesses and strengths and analyzed a plan for our matches. My women’s’ doubles partner was Parul Parmar, the star player of the country. We practiced together and planned for our doubles matches ahead.
In the evening of 26th March, the BWF website had updated with the draws and I had my mixed doubles matches with Vikram on 27thMarch. On 28th March, I had my Women’s doubles and my singles matches. 29th was kept for finals. That day I also came to know that as females in SL3 category were less, so I had to play with higher categories like SL4 and SL5 in full court. (SL3 category has higher disability so they play in half court only). Also because there were few teams registered for Women’s doubles, the event had to be cancelled but we were given an option to compete against men in their doubles. We accepted that challenge and we agreed to play against men.

For our mixed doubles match our group had three pairs and we had to play in Round Robin in it. Our first mixed doubles match was against a pair from England/ Denmark. We lost straight sets. Second match was against a pair From Norway. We won one match and lost the other two.  I and Vikram got a hang of the tournament by losing with first pair that we were confident that we would win with Norway. Vikram knew the game, he was a senior player and he could understand the weak points of our opponents. 1st match was a very tight match and we lost by a difference of two points 22-24. We won the second match also and we were ready to win the third and final match too. But In the end, a team with more experience won. And I and Vikram were happy we could play well.  After losing 2 matches, we were out of Mixed doubles competition.

28th March, I was ready to play doubles with Parul and we had four teams in our group- Three pairs of men and one pair of us females. Parul knew every player and she knew everybody’s game. She encouraged me to play my game and be confident about our pair. We knew we were to be defeated and we stood only one chance to win and that was against a fellow Indian Parveen Kumar and his French partner Pascal. We took that chance and converted. The rest two pairs were difficult to win as one from Malaysia were seeded players. 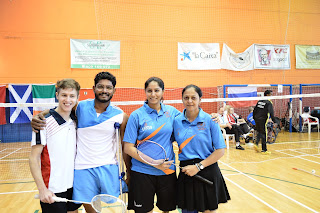 My singles matches were tough as I had to play full court against people with lower disabilities. I could have quit but played anyway. At the end I competed for a bronze medal and 4th position bronze medal against German player Katrin Stewart (SL4) against whom I lost.
I was praised by people for showing a brave face and competing against higher categories which I took as a positive sign. I learnt a lot of things from everyone there and lived a new life which I never imagined for me, a life of a sports player.

I came home and was greeted as a hero here.  I learnt that nothing comes easy in life and you need to work hard every time you need something.
My 1st international tournament was a turning point of my life and gave me so many opportunities.   I learnt more about sports, disability, humanity, knowledge and a complicated thing called adaptation by human body. I have learnt not to focus on what I have lost or my imperfections, but what I have gained and what I have to offer to the world. 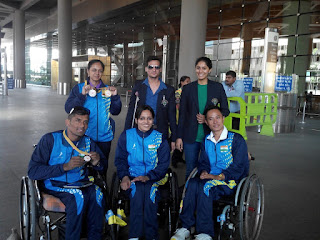 After the Spanish tournament, I again got selected for 2nd Indonesian International Open at Solo city, Indonesia, which I couldn’t go due to unavailability of sponsorships as well as issues with my prosthetic fitment. In July 2015, I got selected in the Indian Squad for BWF Para-badminton World Championships to be held at Stoke Mendeville, England. It still is a dream come true for me. I am working extremely hard for this event and I am sure this tournament is going to be one another chapter to my new found dream and passion. I request all Atosians in UK to come for the tournament and cheer the Indian Para-Badminton team. Tournament will be start from 10th Sept, 2015 to 13th Sept, 2015 at Mandeville Stadium. More information can be found on BWF website or you can contact me directly.

This whole experience and growth as an individual wouldn’t have been possible without the support Atos India provided me for the Spanish International Open. It has opened doors to many new avenues. Atos approved my sponsorship and made sure all my boarding, lodging, visa etc. are taken care of by the company. My friends Trina, Ashwin, Varsha, my project manager, Sagar Mogare and all my team mates, Jasbinder, Nikhil, Asraf, Himansu, and Aadil supported me throughout. I am extremely blessed to be a part of this organization.  Thank you everyone for having faith in me and supporting me. It means a lot to me.

I have learnt a secret to achieving your success, and that is honesty, hard-work and optimism. I have reached wherever I am with these three in me. Sports have power of uplifting and that is what it has done to me. I have still miles to go and a lot to work upon but I am sure that with dedication and perseverance I will reach where I need to be. My new goal is Paralympics 2020, Tokyo.

Manasi
This is the story of newly-found life.